The questionnaire appears in the Winter 2019 edition of Scarisbrick Village Matters (SVM). An electronic version is available for download here. This can be completed on your computer, saved, and emailed as an attachment to scarisbrickpc@outlook.com

The SVM article is reproduced below.

News programmes have recently been as depressing as the weather. Flooding in Northwich saw the Environment Agency (EA) and United Utilities bickering about responsibility. The gloomy point was made that any flood defence would eventually be overwhelmed – a fight with nature has only one winner. Climate change apparently increases likelihood that Southport will become an island. The article ignored that this involves large areas of Scarisbrick being submerged. Then there was the potato farm in Lancashire that flooding had turned into a jet-ski resort!

How much do we know about personal flood risk, what influences it, and who is responsible for managing it? The Parish Council wants your thoughts on flooding in Scarisbrick and asks that you complete the questionnaire in this edition.

Climate change debate is controversial but Met Office records for 2019 demonstrate extremes. Unprecedented temperatures were recorded in February followed by Storms Freya and Gareth. A sunny Easter preceded Storm Hannah. A new UK maximum temperature on 25th July was followed by twice the average rainfall in many areas. Winters of 2013/14 and 2015/16 were the wettest on record with widespread impacts. Intense rainfall plays a major part in flooding and can’t be controlled, but we can influence how rainfall is managed once it hits the ground. Land use, extent of local development, drain and watercourse maintenance all play a part. 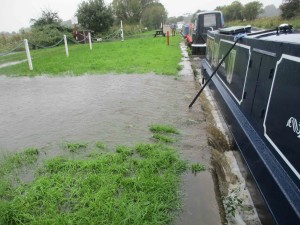 Heatons Bridge – culvert under canal overwhelmed with overflow into canal.

Pluvial flooding occurs anywhere at any time. Heavy and sudden rainfall causes rapid flooding which usually subsides quickly once rain stops. In extreme cases “flash flooding” is fast-moving and dangerous. Pluvial flooding is minimised by good drainage but is commonly seen where drains are blocked or overwhelmed – flooding of roads is an example. Run-off from flooded roads and inconsiderate driving can cause flooding of gardens and inside property. Lancashire County Council (LCC) maintains roadside drains whereas West Lancashire Borough Council (WLBC) clears gutters. 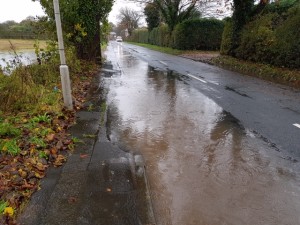 Run-off from adjacent land can be significant if the ground is hardened by compaction (agricultural practices play a role) or prolonged hot spells. Road drains are designed to take water from roads and can silt-up or are overwhelmed in these circumstances. Overdevelopment increasingly causes absorbent ground to be lost. WLBC is responsible for planning but this isn’t simply about new development – we install patios or additional car parking on our properties which contribute to the problem. In rural areas road drains discharge into ditches that may themselves be full, this brings us to another problem.

Fluvial flooding occurs when watercourses overflow. Scarisbrick has many watercourses of various sizes because we live in an agricultural area where ditches drain land, but we also lie between Ormskirk and the sea. Hurlston and Sandy Brooks run through the parish and take the surface drainage of Ormskirk from Scarth Hill downwards. This is a particular concern because 100 year floods are now considered to be 30 year floods. 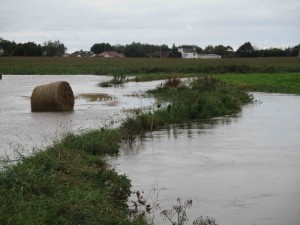 Responsibility for watercourse maintenance depends on classification. Main rivers are the EA’s responsibility; the classification reflects significance rather than size and includes watercourses on Martin Mere. Others are “ordinary” watercourses where responsibilities lie with riparian owners and are defined by legislation. This applies to farmers but also homeowners with drainage ditches crossing or adjacent to their gardens.

Living in Scarisbrick means you are close to a geological bowl which is the pumped area of the Alt-Crossens drainage catchment. This contains some of the most fertile soil in the UK with importance to national food supply contributing £230m to our local economy. It is the lowest point of the Borough’s drainage system and water is pumped out to sea at Crossens. Pumping operations are currently threatened by government cuts. Pumping to protect agricultural resources is no longer considered viable, although no flood threat to property is anticipated. However, new data suggests flooding could be more widespread than predicted and may isolate Southport. The extent of surrounding ground saturation is difficult to determine and could also threaten infrastructure. 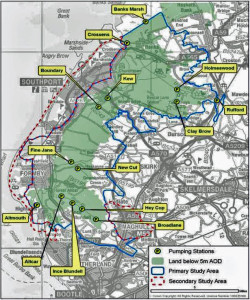 There is growing acceptance that flooding is inevitable but we need to mitigate impacts. Everyone plays a role which may be as simple as reporting blocked road drains or driving more considerately through floodwater. We should avoid covering gardens with impermeable surfaces and consider our carbon footprint. We should take riparian responsibilities seriously. We should hold local authorities to account and challenge policymakers whether this is over new development, pumping station closure, or how often gutters are cleaned. There is also emphasis on reasonable self-help such as purchasing sandbags, installing domestic flood barriers, or clearing grids outside our homes.

If floodwater enters your house, or is over halfway across the road, telephone:

If flooding is from sewers or burst water mains, telephone:

“Flooding in Lancashire” – what to do before, during, and after a flood:

Owning a watercourse – rules and responsibilities: