Scarisbrick’s roll of the Fallen of the First World War was published on Armistice Day. We now remember men and women of the Parish who gave their lives in the Second World War.

(With thanks to Paul Charlesworth)

The following is a roll call of 64 Scarisbrick men who lost their lives during the First World War and are named on the new war memorial at Scarisbrick Village Hall.

Scarisbrick’s memorial to the Fallen of the First World War has now been installed at the Village Hall. Dedicated to the memory of sixty-four men from the parish who lost their lives during the conflict, the memorial is constructed of eye-catching polished black granite with white enamelled lettering and is set amongst natural sandstone paving. 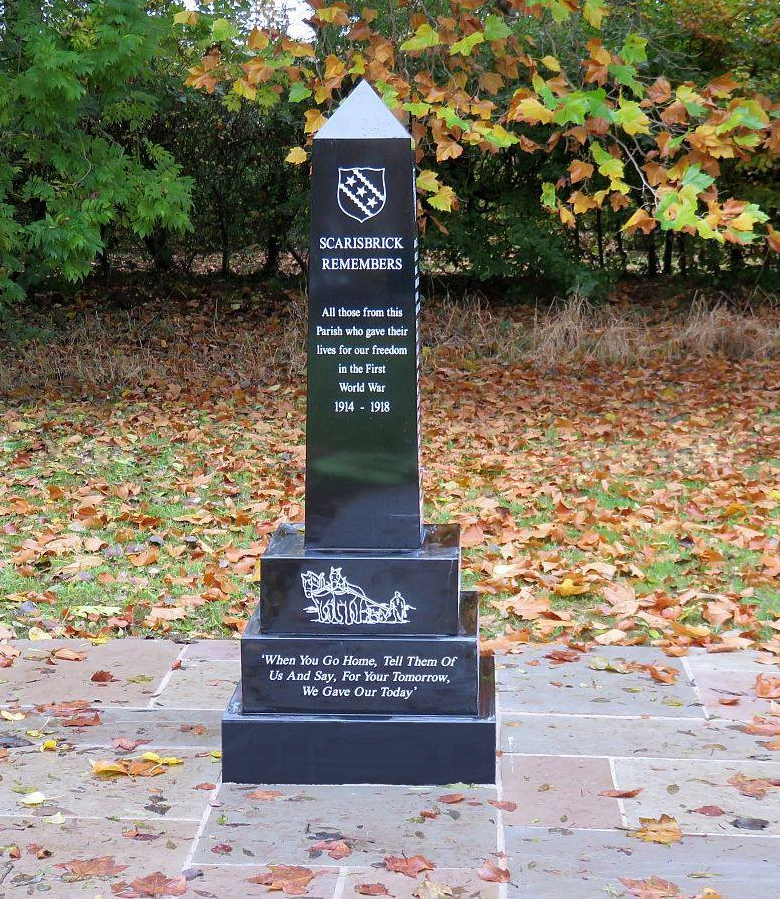 In addition to carrying the names of the Fallen the monument includes a frieze depicting a horse drawn plough together with poppies entwined with sheaves of corn. This highlights the link between the agricultural heritage of the parish and the sacrifice of its men, many of whom had strong connections with the land prior to the conflict. One such man was John Halewood, a former pupil of St Mark’s School who worked as a horseman at a local farm on Hurlston Green. This year marks the centenary of his death during the Somme offensive, one of the bloodiest battles of the war which eventually took the lives of over a million men. In his last letter he poignantly writes of home. In so doing he describes the nature of the sacrifice made by the Fallen, and emphasises why it should not be forgotten:

“I do not know if I shall see either of these places again, but their memory only serves to help me on through these trying times, and make me all the more determined to do my duty, so that my friends and relations may never have cause to be ashamed of me”. 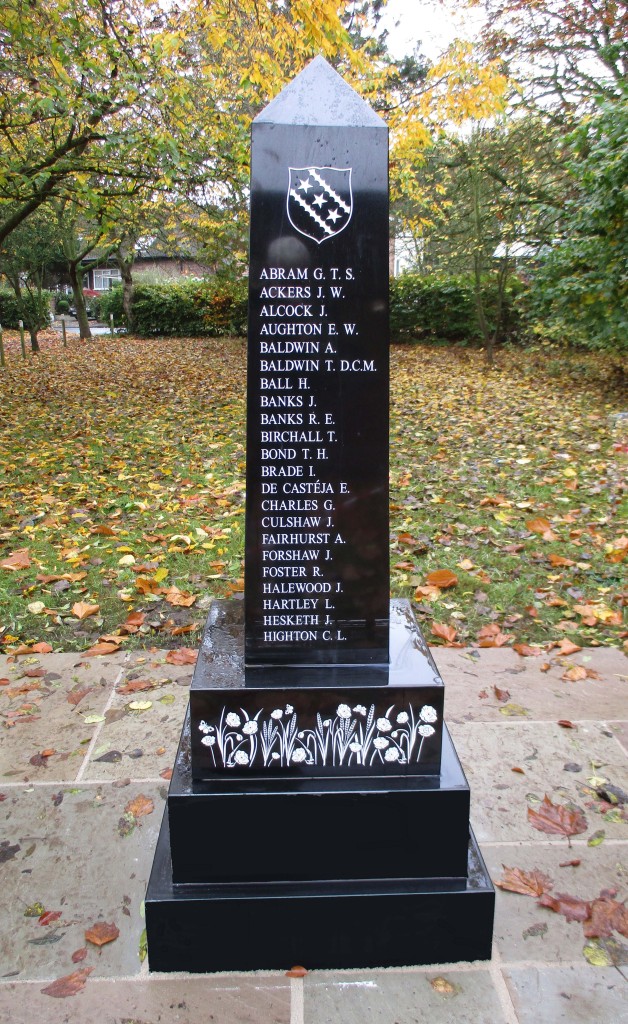 The project was launched in 2014 to commemorate the centenary of the conflict. A community working group was formed and had its first meeting at the end of April. The plan was to establish a new memorial to the Fallen within the parish and to create memorial books to be held in local churches and schools. The monument at the Village Hall marks the completion of the first phase and has added about thirty names to those remembered in local churches. Many local names are represented on the monument with families still residing in Scarisbrick and surrounding areas. It is hoped that the memorial will help to provide closure for these families, given that circumstances often dictated that remains were not returned home. 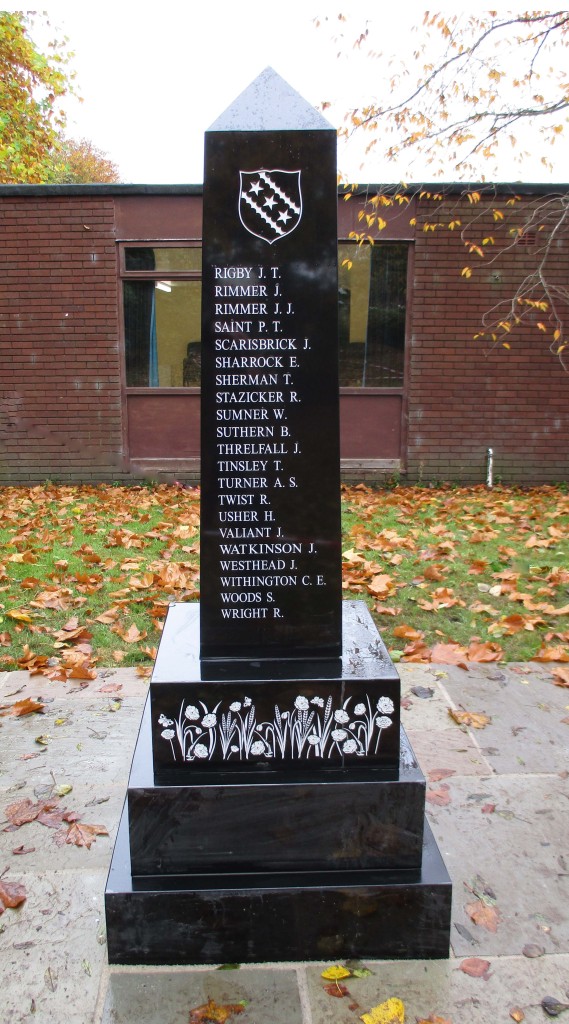 The second phase is underway and should be completed by the end of the centenary. The books will also contain details of local men who served and returned home – a cohort that is often forgotten. It is estimated that the stories of about 200 men will be included and the working group would be pleased to hear from anyone willing to help in the compilation of the books. This website will also carry short biographies of each of the men which will link to the memorial by means of a QR code. The collection of biographies will increase as work is completed and it is hoped that names remembered on the memorial will appear soon.

A number of events have been staged over the last couple of years to raise funds for the project. Fundraising was launched with an exhibition at Scarisbrick Hall School and has since been supported by events organised by local schools, churches and groups such as the WI. There have been significant individual donations and an important financial contribution from the West Lancashire Heritage Association. Local firms have been involved in the construction of the memorial with stonemasonry being supplied by Ormsby of Scarisbrick and groundwork by Dave Finney Landscapes. The invaluable support of the management committee at Scarisbrick Village Hall is acknowledged in providing the site for the memorial. An ecumenical Service of Dedication is being planned for Armistice Day. This will include the Calling of the Names and reading of extracts regarding the lives of the Fallen by local schoolchildren. 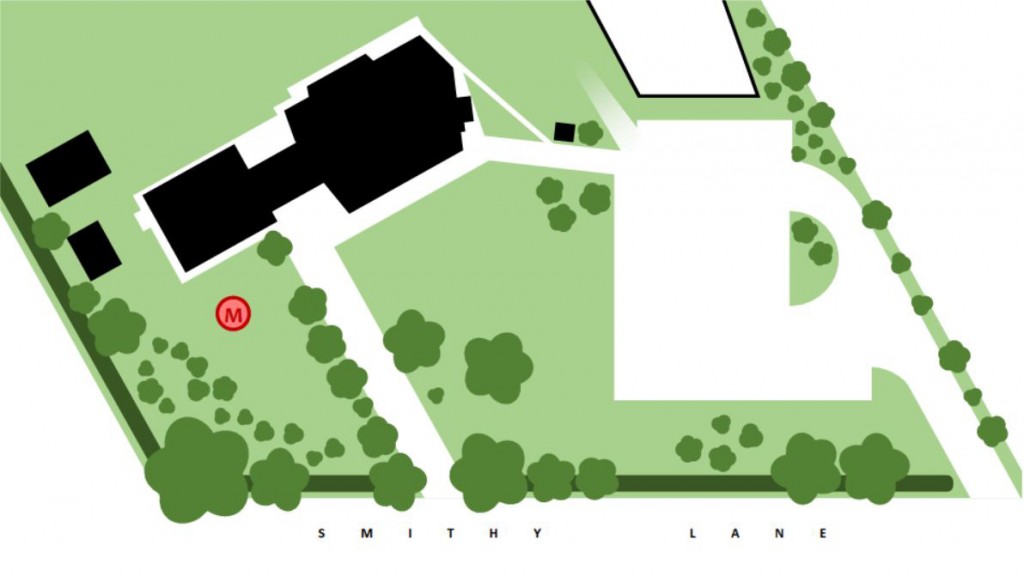 Location of the monument at Scarisbrick Village Hall.

Scarisbrick Parish Council has formally adopted the memorial, taking responsibility for its maintenance and insurance. The Council takes this opportunity to express its gratitude to all those who continue to contribute to the working group and who ensured that plans came to fruition.

The project aims to provide a touchstone between past and present. It affords a source of civic pride whilst reiterating the human cost of warfare, underlining the extra-ordinary sacrifice of a previous generation of Scarisbrick men.